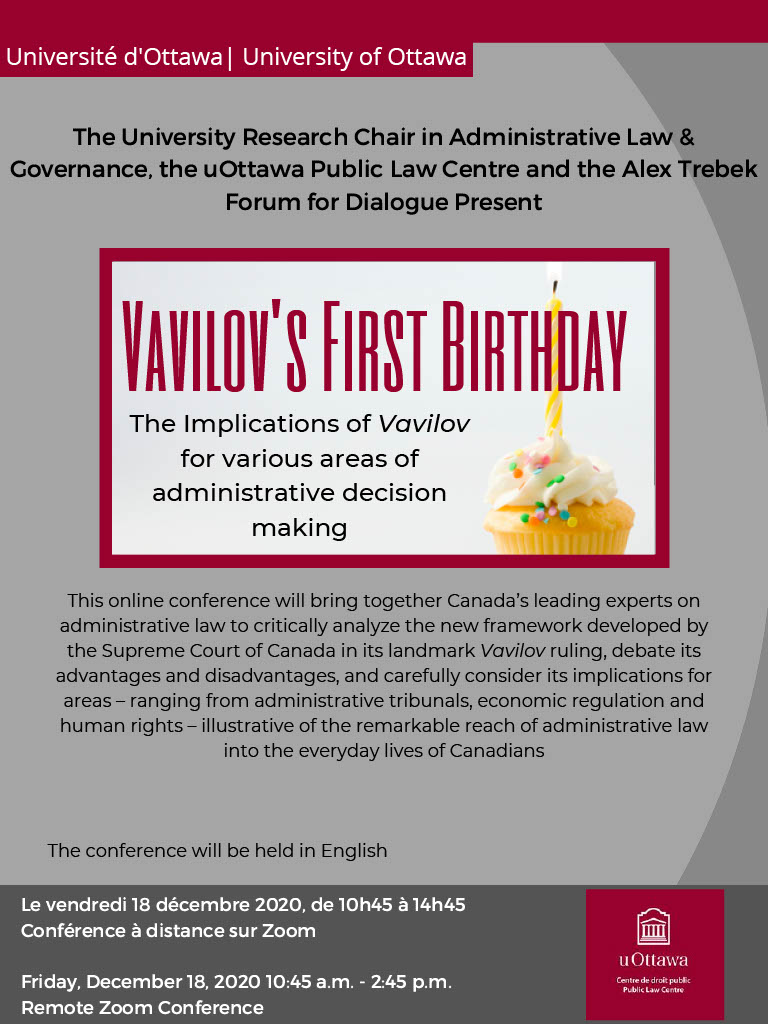 Join some of Canada’s leading experts for a day-long conference analyzing the implications of the key decision of Vavilov for various areas of administrative decision-making. We will celebrate Vavilov’s first birthday on December 18.

The conference will be remote, on Zoom, and free to attend. The format will be a series of round-table discussions. Register here.

The conference will be in English only, and a Zoom link will be sent out to attendees before December 18, 2020.

Here is the agenda for the day:

Angus Grant, Immigration and Refugee Board of Canada (Process and Substance)

Professor Mullan is recognized as one of Canada’s foremost scholars in administrative law. He lectured at the Victoria University of Wellington before joining the Queen’s University Faculty of Law in 1971. Apart from four years (1973–1977) at Dalhousie Law School, he remained at Queen’s until January 2004. His research interests include private and public law, but his major area of academic interest is administrative law.

Professor Mullan is co-author of Administrative Law: Cases, Text and Materials, now in its fourth edition, written in collaboration with faculty members at Osgoode Hall Law School and the University of Toronto. He is also the author of the Administrative Law Title in the Canadian Encyclopedia Digest.

Professor Mullan is currently a panelist under Chapter 19 of the North American Free Trade Agreement and a part-time member of the Ontario Human Rights Code Board of Inquiry.

Audrey Boctor is a lawyer IMK Advocates. She has a broad commercial and public law practice, including constitutional and human rights law and a range of administrative and regulatory matters. She also regularly advises on matters relating to private international law, including jurisdiction, state immunity, recognition and enforcement of foreign judgments and arbitral awards and the taking of evidence abroad.

Audrey Boctor’s educational background includes a LL.B. and B.C.L. from McGill University, and a B.A. (Hons) in Political Science and French (Gold Medalist) from Western University.

In 2018, the Supreme Court of Canada appointed Audrey as amicus curiae in Bell, NFL and Vavilov, a landmark set of three administrative law appeals that reshaped the standard of review in Canadian administrative law.  In 2019, Audrey was lead counsel to Instrubel, N.V.  before the Supreme Court of Canada in a major private international law appeal.  She succeeded in having the appeal dismissed from the bench.

Audrey was the 2018-2019 President of the Canadian Bar Association, Quebec Division. A former law clerk to Chief Justice Beverley McLachlin, P.C., she previously practiced in the financial products and markets group at Cleary Gottlieb Steen & Hamilton LLP in New York and taught at Columbia Law School.

Mary Liston is an Associate Professor at the Peter A. Allard School of Law, University of British Columbia. She teaches public law including administrative and constitutional law, legal theory, and law and literature. Her research focuses on public law, administrative law, and the intersection of constitutional law, legal theory, and democratic theory.

Mary Liston is a co-author of Public Law: Cases, Commentary and Analysis and a contributor to Administrative Law in Context. Her work has been cited by the Supreme Court of Canada in several precedential public law cases.

Professor Liston takes an interdisciplinary approach to her research. Her recent research projects include an analysis of legal and moral import of the duty to consult and accommodate in administrative law and the function of apologies in Canadian public law.

Lauren J. Wihak is an associate at McDougall Gauley LLP in Regina, Saskatchewan. Her civil litigation practice places an emphasis on public and administrative law, appellate litigation, and constitutional litigation. She is also a sessional instructor at the University of Saskatchewan, College of Law, teaching Appellate Advocacy and Principles.

Lauren Wihak’s educational background includes a degree from the University of Ottawa, and a Juris Doctor from Queen’s University. Prior to starting her career as a lawyer, Lauren clerked for the Honourable Mr. Justice Louis LeBel of the Supreme Court of Canada (2009-2010) and the Honourable Madam Justice Georgina R. Jackson of the Court of Appeal for Saskatchewan (2008-2009).

Lauren served on the Canadian Bar Association’s Supreme Court of Canada Bench and Bar Committee.  She has also served on the CBA’s Legislation and Law Reform Committee.  She served as the coach of the Thompson Rivers University Wilson Moot Team for five years. Lauren is currently on the Board of Directors of the RCMP Heritage Centre.

Lauren is the author of a legal blog entitled “The Admin Law Blog”, providing commentary and analysis of important and interesting administrative law decisions from the Supreme Court of Canada and other Canadian courts.

Sheila Wildeman’s educational background includes an LLB from Dalhousie University, a MA from Columbia, and a BA and LLM from University of Toronto.

Sheila Wildeman is a member of the Health Law Institute and a Founding Fellow of the MacEachen Institute for Public Policy and Governance. She also was on the Board of Directors in the Nova Scotia Division of the Canadian Mental Health Association.

Sheila’s research in disability law has focused on medico-legal constructions of consent and capacity, with attention to international and domestic human rights as a source of entitlement to supports for the exercise of agency and choice. This work approaches freedom as a function of equal access to the social determinants of health and community living.

Dr. Chrisite Ford is a Professor and Associate Dean, Research and the Legal Profession at the Peter A. Allard School of Law, University of British Columbia. Dr. Ford’s research interests include regulatory governance, US and Canadian financial and securities regulation, and access to justice and governance issues related to the legal profession.

Dr. Ford’s educational background includes a BA from University of Alberta, a JD from University of Victoria, and an LLM and JSD from Columbia Law School. Prior to joining UBC, Professor Ford practiced law at Guild Yule LLP in Vancouver and Davis Polk and Wardwell LLP in New York.

Professor Ford edited Regulation & Governance and now sits on its Executive Board, among other editorial and advisory boards. She has served as a consultant to the Canadian Department of Finance, and her work has been cited by the Supreme Court of Canada in some of its leading cases. She has lectured across North America and in Europe, Australia, and Israel. She has been a Killam Faculty Research Fellow at UBC, a Plumer Research Fellow at St. Anne’s, Oxford University; and a Fernand Braudel Senior Research Fellow at the European University Institute.

Stéphanie Roy is a doctoral candidate in administrative law at Université Laval. She is also a researcher and lawyer motivated by the desire to redress the current environmental crisis. Her research interests include the government’s obligations with regard to the environment. Her doctoral research examines the trusteeship theory, a form of governance that would allow greater responsibility for the environment to be attributed to the state.

Stéphanie’s educational background includes a Bachelor of Laws (international profile) at Université Laval, further studies at the École du Barreau du Québec, and a Master’s in environmental law at McGill University. Her Master’s thesis, on civil liability won the Michel-Robert Award from the Canadian Bar Association and was published by Éditions Yvon Blais. She has also worked as a litigation lawyer in a large firm.

Stéphanie’s desire to make a difference explains her engagement in various social and cultural causes during her academic and professional career. She has volunteered with the legal information bureau at Université Laval, the Club musical de Québec, and Pignon bleu. She is also on the board of directors of the Centre québécois du droit de l’environnement. Her community involvement has been rewarded by a Québec Lieutenant-Governor’s Medal (2005).

Jamie Chai Yun Liew is an associate professor at the University of Ottawa Faculty of Law (Common Law Section). Her research interests include immigration, refugee and citizenship law, administrative law, and public law.

Jamie Liew’s educational background includes a BA and BCom from University of Calgary, an LLM from Columbia, a MA from Carleton University, and an LLB from University of Ottawa. After articling at a national full-service law firm in Toronto, Jamie clerked for Justice Douglas Campbell at the Federal Court, was a member of the Issa Sesay defence team at the Special Court for Sierra Leone and was Commission Counsel at the Cornwall Public Inquiry. Jamie is currently a member of the litigation committee for the Canadian Council for Refugees (CCR).

In 2007, Jamie opened a feminist legal practice with a colleague and practiced in a variety of areas including administrative law. She continues to practice immigration and refugee law today as a sole practitioner.

Jamie is the co-author (with Donald Galloway) of Immigration Law. She won the Faculty of Law, Common Law Section 2018-19 Public Engagement Award: Media Relations and is the winner of the 2018 Asian Canadian Writers Workshop (ACWW) Jim Wong-Chu Emerging Writer Award.

Steve Barrett is Managing Partner at Goldblatt Partners in Toronto. His areas of practice include labour and employment law, administrative and public law, and appellate practice.

Steve Barrett’s educational background includes a BA from University of Toronto and an LLB from Osgoode Hall Law School.

Steven is most widely known for his work advancing the freedom of association guarantee in s. 2(d) of the Canadian Charter of Rights and Freedoms.  He has represented intervenors in Supreme Court of Canada appeals dealing with the interpretation of s. 2(d), including in cases where the Court extended the scope of s. 2(d) to protect collective bargaining and the right to strike. He has published a number of articles on that jurisprudence and discussed it at many legal conferences.

Ms. Khurana is an experienced decision-maker and lawyer with a background in social justice, human rights and international law developed in diverse multicultural and multilingual environments in Canada and abroad. She has broad leadership and adjudication experience in administrative law and judicial settings.

Ms. Khurana has served as a Vice-Chairperson at the Social Security Tribunal of Canada and also at the Human Rights Tribunal of Ontario, and as a Member of the Ontario Social Benefits Tribunal.

Internationally, Ms. Khurana was the Director of International Humanitarian Law at the American Red Cross in Washington, D.C., and from 2003-2009 served as legal advisor in Chambers and as External Relations Advisor to the President of the International Criminal Court in the Hague.

Angus Grant is a refugee lawyer with the Immigration and Refugee Board of Canada, Legal Aid Ontario, and in his own private practice. His areas of interest include immigration law, constitutional law, corporate law, competition law, and government.

Mr. Grant’s educational background includes a BA from Trent University, a JD from University of Toronto and a PhD in Law from Osgoode Hall Law School. Mr. Grant was awarded one of the 2016 dissertation prizes by York’s Faculty of Graduate Studies Awards Committee for his dissertation entitled Confronting (In) Security: Forging Legitimate Approaches to Security and Exclusion in Migration Law.

Dr. Raso is an Assistant Professor at the University of Alberta Faculty of Law. Her research interests include socio-legal Studies & Research Methods, Municipal Law, Legal Theory and Administrative Law.

Dr. Raso’s research has been funded by the Social Sciences and Humanities Research Council (Canada) and the Endeavour Fellowships Program (Australia). Her research has been recognized by the Canadian Law and Society Association (best article prize, 2018) and the University of Cambridge (Richard Hart Prize, 2016).

Dr. Raso’s scholarship appears in the Canadian Journal of Law and Society, the Journal of Law & Equality, and PoLAR: Political and Legal Anthropology Review.

Alexander Pless was appointed to the Superior Court of Quebec in the Fall of 2020. He was previously Senior General Counsel at the Department of Justice Canada. His research interests include administrative and constitutional law. He is regularly invited to give lectures and has published several articles on various subjects of public law.

Justice Pless’ educational background includes a bachelor’s degree, BCL, and LLB from McGill University, and a master’s in public administration from Harvard Kennedy School of Government.