My blogging year has been dominated — almost bookended, even — by two symposiums, one (held jointly with Double Aspect) to mark the tenth anniversary of the Supreme Court of Canada’s decision in Dunsmuir v New Brunswick (see here), and another on a United Kingdom Supreme Court appeal concerning ouster or privative clauses, published on Administrative […] Read more

In a previous post, I complained about the approach the Irish courts have taken to the scope of the obligation on the Oireachtas (the Irish Parliament) to transpose certain measures of E.U. law into domestic law. These concerns are underscored by the decision of the Supreme Court in O’Sullivan v Sea Fisheries Protection Authority [2017] […] Read more

A Tale of Two Courts: Administrative Law in the SCC and UKSC

Mine this time, following from Professor Macklin’s provocative post last week. Having tuned in for the oral arguments, I am slightly more optimistic about the Supreme Court of Canada’s endeavour than I was before the hearing. The judges certainly asked pertinent questions over the three days and homed in on the methodology of reasonableness review […] Read more

The appropriate scope of the use of sophisticated computer programmes by government agencies is likely to be one of the most important topics in administrative law and administrative justice in the next decade. Indeed, it already is attracting significant scholarly and political attention, from the use of automated technologies to collect overpayments of welfare benefits; […] Read more

This is a guest post from Professor Audrey Macklin I represented the intervener Canadian Association of Refugee Lawyers (CARL) before the Court in Vavilov.  I will not rehearse the contents of the factum or my oral argument. Suffice to say that that, as a colleague remarked to me, the Court appeared “completely nonplussed” by my […] Read more

I have an unusually large number of draft papers which I am unable for various reasons to post on SSRN. I would, however, be very happy to share them with any readers who may be interested in having a look: “Substantive Review in the Common Law World: AAA v Minister for Justice [2017] IESC 80 in […] Read more

Cross-posted from the Administrative Law in the Common Law World symposium on ouster clauses I want to explore three aspects of the decision in Anisminic v Foreign Compensation Commission [1969] 2 AC 147 which are relevant to the Privacy International ouster clause litigation. I will explain their relevance by reference to comparative materials. First, the […] Read more 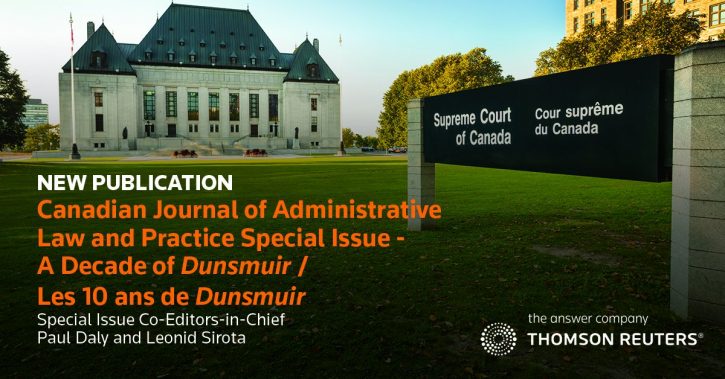 The Supreme Court of Canada’s Administrative Law Trilogy: What to Expect?

The special issue of the Canadian Journal of Administrative Law & Practice, featuring the contributions to this year’s Administrative Law Matters/Double Aspect symposium on Dunsmuir v New Brunswick [2008] 1 SCR 190, is now available for purchase. Just as the volume went to press, the Supreme Court of Canada granted leave to appeal in a […] Read more

Last month, the Centre for Public Law here at the University of Cambridge hosted a one-day symposium on the Privacy International litigation (see my previous posts on the case, here and here). Blog posts written by the symposium participants are now appearing on the Administrative Law in the Common Law World blog in the run-up to the […] Read more

Last month, I gave a talk on Brexit to my colleagues at Queens’ College. In light of recent events, I think it is worth reproducing here. As a humble public lawyer I do not claim to be able to look into the hearts and minds of those who voted in the referendum on the United […] Read more