The Constitutionality of Henry VIII Clauses in Canada: Administrative Law Matter (No. 1) in the References re Greenhouse Gas Pollution Pricing Act, 2021 SCC 11

Last month, the Supreme Court of Canada issued its decision in the References re Greenhouse Gas Pollution Pricing Act, 2021 SCC 11. I am going to post three pieces on the decision: this one, on constitutional limits on delegation in Canada; a second on review of regulations made under the Act, especially Part 2 of […] Read more

Cross-posted from Australian Public Law blog: for the opening post in the series, see here. As Janina Boughey has recently observed, the reforms that followed from the report of the Administrative Review Committee, more commonly known as the Kerr Committee, were sweeping and, at the time, revolutionary. It is now nearly 50 years since the […] Read more

In New Brunswick – Canada’s only bilingual province – there is a constitutional challenge to the appointment of a unilingual Lieutenant Governor. The Centre for Public Law held a panel discussion on the case last week. My comments, which relate to the justiciability of prime ministerial advice to the Governor General and the justiciability of […] Read more 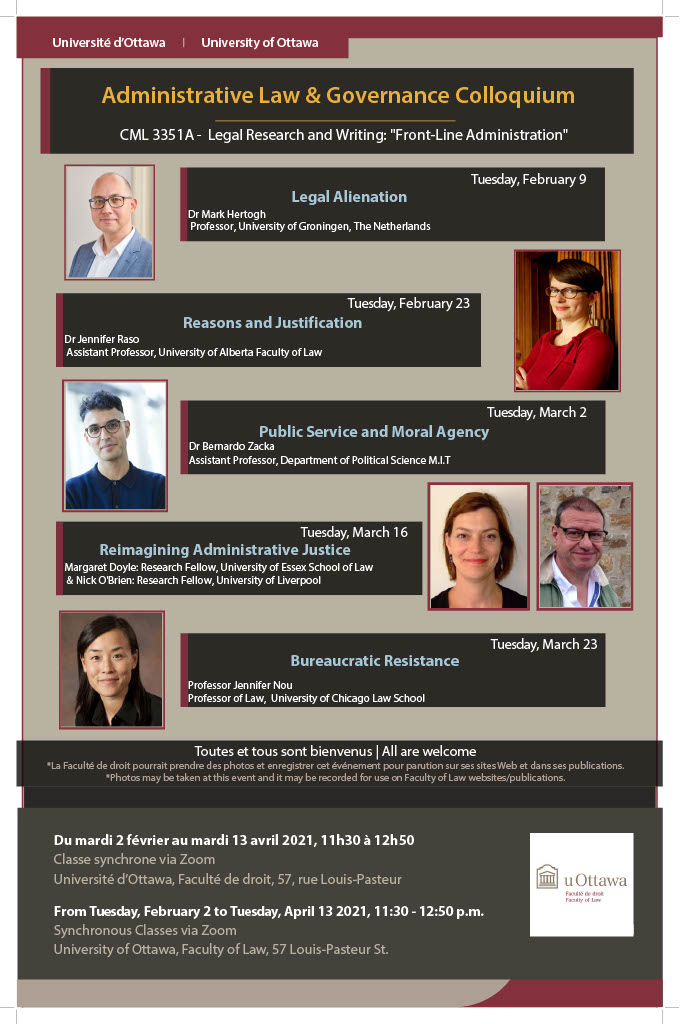 UPDATED APRIL 23 Many thanks to those of you who joined in for this year’s Administrative Law & Governance Colloquium. Here are recordings of the talks by Jennifer Raso (“Reasons and Justification”), Margaret Doyle and Nick O’Brien (“Reimagining Administrative Justice”), and Jennifer Nou (“Civil Servant Disobedience”): Read more

I am happy to be cross-posting from the Australian Public Law blog a series of posts celebrating the 50th anniversary of the Kerr Report, a landmark report in Australian administrative law and one which forms part of a Commonwealth-wide wave of administrative law reform. The first post is by Dr Janina Boughey (University of New […] Read more

The last speaker in this year’s Administrative Law & Governance Colloquium is Professor Jennifer Nou (University of Chicago). We will be live on Zoom on Tuesday March 23 at 11.30 EST. Professor Nou will be speaking about her well-known article “Civil Servant Disobedience“: Bureaucratic resistance is a historically unexceptional feature of the administrative state. What […] Read more

The UK’s Independent Review of Administrative Law was completed earlier this year. The Faulks Report was published today. Although the UK government may try to suggest otherwise, the headline is that the Panel does not think significant reforms of judicial review are appropriate. Chapter 1 addresses the possibility of codifying administrative law. (You can see […] Read more

The next speakers in this year’s Administrative Law & Governance Colloquium on “Front-Line Administration” are Margaret Doyle and Nick O’Brien. They will be having a dialogue about their recent book, Reimagining Administrative Justice: Human Rights in Small Spaces (Palgrave, 2019): This book reconnects everyday justice with social rights. It rediscovers human rights in the ‘small […] Read more

Over at Verfassungsblog, as part of an international series on COVID-19, I have a post on the law and politics of the pandemic response in Canada. Here are the opening and closing paragraphs: As of early 2021, the COVID-19 pandemic continues to rage across Canada. These are dark days. Although the arrival of vaccines suggests […] Read more